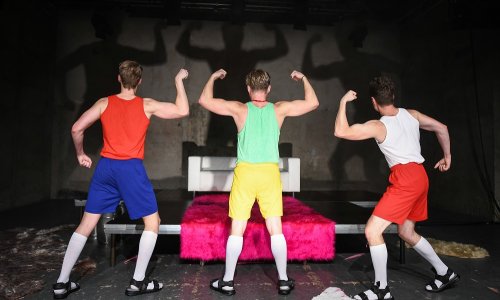 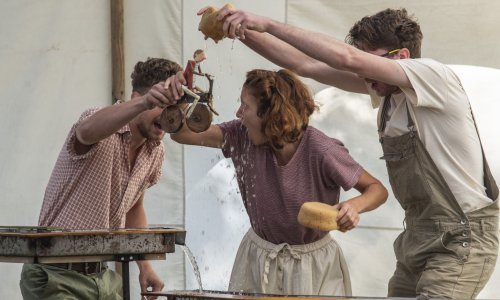 Jana Vojnárová is a painter already well established on the Czech art scene, known for her long-time continuous work, in the media of painting and paper collage, straddling the borderlines between tracing down her own family history, drawing inspiration from collective memory, studying documents of different national histories, and exploring miscellaneous visual sources dating from different periods. Vojnárová has located at the centre of her painterly handwriting attempts at harmonizing the correlation between a linear treatment of figure, technically very close to drawing, and an unconstrained gesture in her employment of colour across the pictorial surface, where the latter conceals sharply defined lines and washes them off into abstract forms. Jana Vojnárová uses the same principle of overpainting in her collages which this painterly intervention releases from their bracketing as mere compilations of appropriated photographic and printed period materials. In her output, the systems of collage and painting are mutually intertwined, representing much rather than two separate media outputs a common and cohesive framework for the artist´s tackling of the twodimensional pictorial format.

By juxtaposing her individual sources of inspiration and base materials, Jana Vojnárová abstracts their actual historical contents to transform them into specific emotional narratives. Individual stories, records and instructions thus morph into fuzzy imprints of memory, and rather than serving as historically stylized documents they are treated as the artist´s private mirror which, veiled over by the mist of an indulgent gesture, allows the artist to spin the odd fictional story relating to her own childhood. Reflected in this mirror is an image of the painter which she herself is unaware of beyond the realm of painting, one within whose premises she identifies with painted-over past history. This is a past whose protagonists´ faces have been forgotten and supplanted by mere contours filled with air.

Anna Hulačová is a well-known and respected sculptor who uses the language/institution of contemporary visual art as a vehicle for interpretations of a wide variety of mythological, folkloric and religious subjects and their corresponding symbolic systems. Over the last few years, Anna Hulačová has adopted as the principal form of her creative expression a characteristic sculptural figuration, often drawing on reinterpretations of traditional folklore handicraft techniques. Hulačová´s figures are charged with a sense of tension issuing from an intrinsic conflict between her choice of  material and connotations of the emergent stylized representation. She individuates her sculptural objects by characteristic two-dimensional interventions, articulating by means of pasted-on prints, drawings or photographs various relevant semantic juxtapositions.

In her most recent output of mostly wall-posted relief objects in concrete, Anna Hulačová tends towards an increasingly reduced form which seems to enable her to chart the limits of the message that can still be conveyed given the minimum scale of formal devices available. There, she brings up a series of microbes, mysterious animals and fragments of the human body to balance out an anthropomorphous army of figures without individual faces, with a view to projecting their shared narrative further beyond the border of human history. This is a story of the Apocalypse, of a fall whose deviser recognizes his portrait in a human figure, in a bust with the face detached.

Thus both artists clearly have in common a certain feeling of absence mediated through the form of human figure. Vojnárová uses it in her progress towards a re-interpretation of an image of the past where she strives to bring missing elements back to existence by the ephemeral situations rendered in her collage-treated paintings. In her turn, Hulačová perceives figure as a symbol of decline, decomposition, loss of cohesion: a face that is either missing or pared down to absolute anonymous typization, signalling loss of sense, the ultimate dissociation from a sustainable ecological or environmental cohabitation.

Underlying this shared concern with the figure and a dissolving, hidden face, the obvious synergy of the artistic pursuits of Jana Vojnárová and Anna Hulačová brings out the contours of an exciting, complex depiction of the human condition; an image where the Apocalypse alternates with the intimacy of a young girl´s family history; and image of a hard-won tender, fleeting memory and a carelessly unconcerned forgetting at one time; and last but not least, an image of wordless veiled testimony as well as of (un)masked burdensome augury. The common denominator of their endeavours is concern with the human being, both as an individual person or specific type, and as a human being representative of a family, or species. While for her part, Vojnárová probes into the subject of the family-based essence of being through the process of appropriation of intergenerational narratives, Hulačová tackles the human species by way of its comparison with the vital energies embodied by micro-organisms, fossil ferns, and social insects. The final verdict on humanity in the face of this comparative study remains inconclusive. Even so, taking into account the theory of probability, there still exists at least one other (parallel) universe in which everything is going to end well.